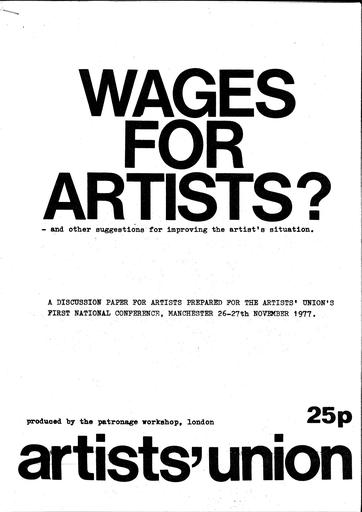 As part of the Unionising Workshop held at Flaxman Lodge in June 2004 a collection of materials (newsletters, leaflets, letters etc.) relating to the Artist Union (1972-1984) was gathered by Jakob Jakobsen and Anthony Davies. The Artist Union was set up to promote the role of artists in society as a force for social change (‘Art is Work’) and developed several work groups including a Women’s Workshop and an Artists in Education Workshop. The first chair of the AU was artist Mary Kelly along with Gustav Metzger as vice-chair. An initial plan to be affiliated to the TUC was later rejected. In 1974 a proposal was made to reform the Arts Council and by 1977 the AU had launched the discussion paper Wages for Artists? Thanks to Anthony Davies for depositing these materials which comprise of original material and photocopies. A small collection of photocopies documenting the NYC Art Workers Coalition (1969) can also be consulted here.