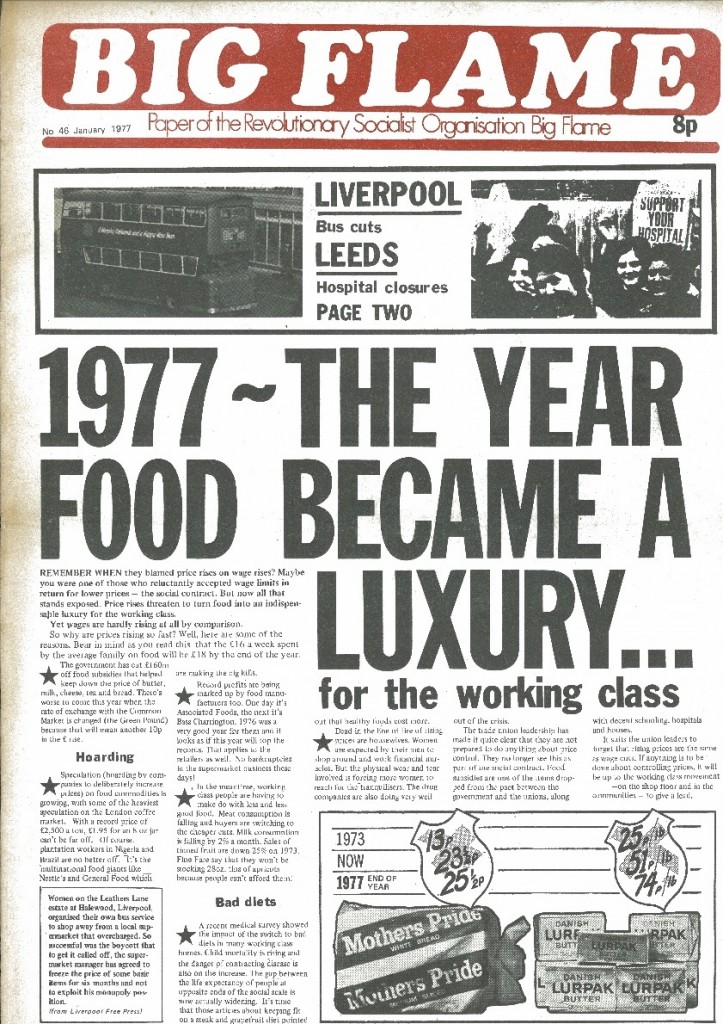 Named after a play by Liverpudlian writer, Jim Allen, Big Flame started out in the early 70s as a rank and file newspaper that gradually developed into a revolutionary socialist feminist organisation. It continued to issue a monthly paper and in each edition the following ‘Basic Points’ were reiterated (1) building a political practice based on the mass of the working class, not merely its representative layers (2) combatting reformism (3) ‘the social factory’ (4) class first, party second (5) for the autonomy of each specifically oppressed sector (6) a non-sectarian and non-authoritarian political method.

Big Flame groups were soon established in London, Birmingham, Leeds and Manchester and close links were made with Italian struggles and ideas in the shape of Lotta Continua. Big Flame is, furthermore, notable for its internationalist perspective and for the key role it played in supporting the ‘autonomous movements’ of women, black and gay people. The materials held at MayDay Rooms include copies of the Big Flame newspaper spanning the 70s and a box file of contemporaneous internal documents. We are grateful to Martin Yarnit for depositing these with us.

“Dockers Black The Act”
“’Life’ on The Freeze”
“Our Reply To Their Phase III”
“Support the Miners”
“Liverpool Property Scandal…Hush Up”
“Support the Nurses”
“We Won’t Pay For A Bosses Budget”
“Bakers: £40 for 40 Still The Aim”
“How Inflation Backfired on The Bosses”
“Fight For Better Health Service”
“No To The Bosses market!”
“Kids Before Profit”
“We are In – We Will Win – Workers Occupation at MEL”
“More Than The Market At Stake”
“Unite to Win – Wages, Rents, Cut-backs”
“Rent Up: ‘We Can’t and Won’t Pay”
“No Rent Rises. No High Rises”
“Give Us Houses Not Rent Rises”
“Jobless Must Fight Back”
“Unemployment Can Be Fought”
“Put The Bosses On The Dole”
“Some ‘Rescue’! 8000 lose Jobs At Chrysler”
“Merseyside on The Dole”
“Health Is Not For Sale”
“Black Kids Fight Back”
“Tate’s Must Not Close”
“Hospital Workers Fight The Cuts”
“Time to Fight!”
“50 Years Since The General Strike. But It’s Still Time To Fight”
“Student Teachers Occupy For Jobs”
“Kirckby: Barricades Against The Cuts”
“Trucks Smash Pickets”
“Rent Up Again, 30000 Corpy Repairs Outstanding”
“Attack From The ‘Fringes”
“Sacrifices Today Don’t Mean Jobs Tomorrow”
“It’s The Rich Who Are The Scroungers”
“1977 – The Year Food Became A Luxury”