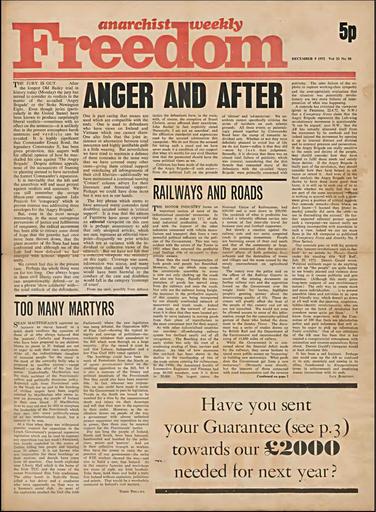 Sundry copies of Freedom, ranging from the years 1924 to 1996, donated by Housman’s Bookshop. Freedom, a magazine of ‘anarchist socialism’ (later ‘anarchist communism’), was founded and edited by Charlotte Wilson in association with the geographer and anarchist Peter Kropotkin. Publication began in 1886 from the offices of the Freethought Press near St Bride, Fleet Street; it was printed on the Socialist League presses by arrangement with William Morris. Freedom was published continuously throughout the 20th century. Among its editors were Vernon Richards and Colin Ward, operating from its long-term home in Angel Alley, Whitechapel. The closure of its print edition was announced in March 2014.