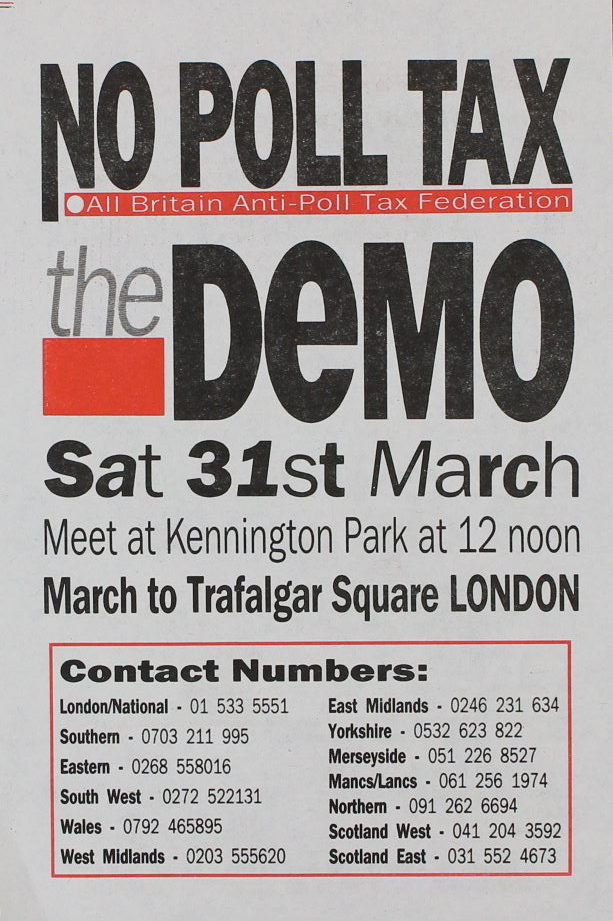 For many the revolt against the imposition of the Poll Tax marks a unique moment in British social history. This Tax, effectively replacing a property based rates system with a per-head ‘community charge’, was subject to widespread mobilisation and mass protest that figured as a ‘popular front’ against the then Conservative Government. Anti-Poll Tax groups sprang up initially in Scotland in 1989 where the Tax was introduced a year earlier than in the rest of the country. Anti-Poll Tax groups then spread throughout Britain and these were notable for the way in which they entailed a very local, often street-level, mode of organising. Regular meetings were held, information was disseminated and non-paying solidarities were formed that led to a resistance to each stage of the imposition of the poll tax: burning bills, protests at court and local government chambers, resisting evictions, campaigning against jailings. The small collection at MayDay Rooms includes press cuttings, pamphlets, meeting minutes, flyers, posters and newsletters from several Anti-Poll Tax groups. These materials depict the minutiae of a popular groundswell that following the Trafalgar Square Riot led to the abolition of the poll tax in March 1991.