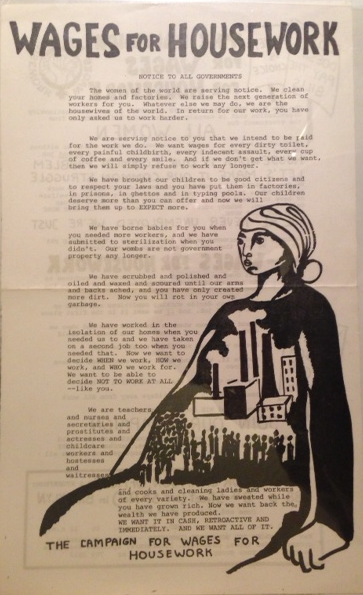 The Wages for Housework campaign was launched in Padova at the International Feminist Conference of July 1972. Within two years it was holding its own international conference in Brooklyn, New York and issued a position statement: “Wages for Housework is the feminist perspective and therefore the class perspective.” Opening up both an exploration of the wage and presciently raising the issue of reproductive and affective labour, the Wages for Housework campaign maintained its momentum for the rest of the decade. The box of materials held by MayDay Rooms and kindly donated by Silvia Federici relate to the New York Wages For Housework collective and contain publications, posters, flyers, photographs, press cuttings and organisational documents. They span the period from the Padova Conference to the publication, in 1981, of the journal Tap Dance.