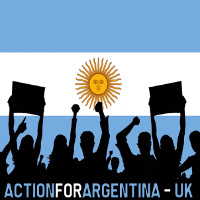 We are a politically pluralist collective of UK-based activists who campaign in solidarity with social and labour struggles for human rights and those that oppose the damaging consequences of neoliberalism in Argentina. On Thursday 17th January our guest speaker, Cristina Chistel from the Autonomous CTA union (CTA Autonoma) in Argentina will be talking to us about current labour struggles in Argentina.
The meeting and assembly are open to the public.
www.facebook.com/actionforargentinauk/