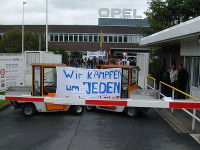 “Air to breathe” Screening– 40 years of trade union opposition at Opel/General Motors car plant in Bochum, Germany
Labournet.tv and AngryWorkers proudly present the first UK screening of a new documentary on workers’ organising at one of the most militant car factories in Germany.

In 1972 a few workers and revolutionaries at Opel/General Motors in Bochum founded the “Gruppe oppositioneller Gewerkschafter” [Group of oppositional trade unionists] (GOG). The GOG would exist for the next 40 years during which their rank-and-file radicalism helped to keep up workers’ spirits of resistance.

As shop-stewards they breached confidentiality clauses in order to keep their fellow workers informed; they enforced eight-hour long general factory assemblies and fought the companies’ repression of sick colleagues; they organised their own educational holidays and formed links with General Motors workers in other parts of Europe in order to counter management’s strategy to play production locations off against each other.

Their collective efforts culminated in one of the most significant wildcat strikes in post-war Germany, when workers occupied the plant for six days in 2004, threatening to bring General Motors factories all over Europe to a standstill. [2]

The documentary is also a personal account of workers’ militants who chose to stick and grow old together and to work and fight in the centre of conflict between capital and labour.

We want to discuss this specific experience, but we also want to ask ourselves what lessons there are to learn for today – now that the plant has been shut down and the world of industries has changed.