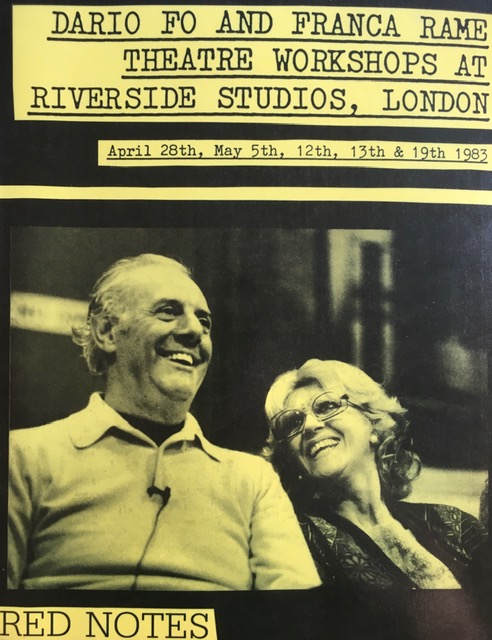 In April- May 1983 Dario Fo and Franca Rame visited London and delivered 4 workshops at Riverside Studios. Red Notes published later a pamphlet with notes from the workshops, an interview with the two militant theatre makers and four plays (three of them previously untranslated).

For this session we chose to collectively read Franca Rame’s monologue “La Madre” (The Mother) and Fo’s “Waking Up”, performed by Rame. Both plays are elaborating the notion of motherhood, the sacrifices, the loss of one’s self, the guilt, the love. We will read them together online – something like a collective participatory radio play, in which anyone can join, and give our collective voices to a monologue that belongs to all of us.

With this Antiuniversity session we are celebrating the collection Ed Emery deposited with us last year with his translations of dramas by Dario Fo. Ed began his collaborations with Fo in the early 1980s, and has produced a large number of translations of plays.

The reading will be followed by a short discussion.

To get the texts and zoom link use go to Eventbrite.