FINALLY GOT THE NEWS! 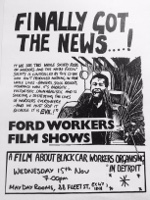 Continuing our screening series recreating the film showings of the FORD WORKERS’ Group in Dagenham, this month we will be screening FINALLY GOT THE NEWS.
FINALLY GOT THE NEWS is a forceful, unique documentary that reveals the activities of the League of Revolutionary Black Workers inside and outside the auto factories of Detroit. Produced in 1970 as a collaboration between Newsreel filmmakers and the League of Revolutionary Black Workers, Finally Got the News paints a picture of race, class, and labour issues in Detroit while exemplifying the ways cinema at the time was used by filmmakers as a means for liberation and a tool for worker struggles.