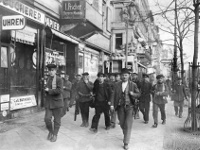 The German revolution, which effectively put an end to World War One and came close to establishing the rule of the workers’ councils in a central country of capitalism, has almost been written out of history. It is still in the interests of our rulers to present the October revolution in Russia as a purely Russian affair and to pretend that the world revolution was and is an idle dream. And yet the revolution in Germany showed that it was indeed a possibility, despite its defeat with all its catastrophic consequences (Nazism, Stalinism, a second imperialist world war…). It is vital to draw its principal lessons for future revolutionary movements of the working class, and this will be the main focus of the meeting.