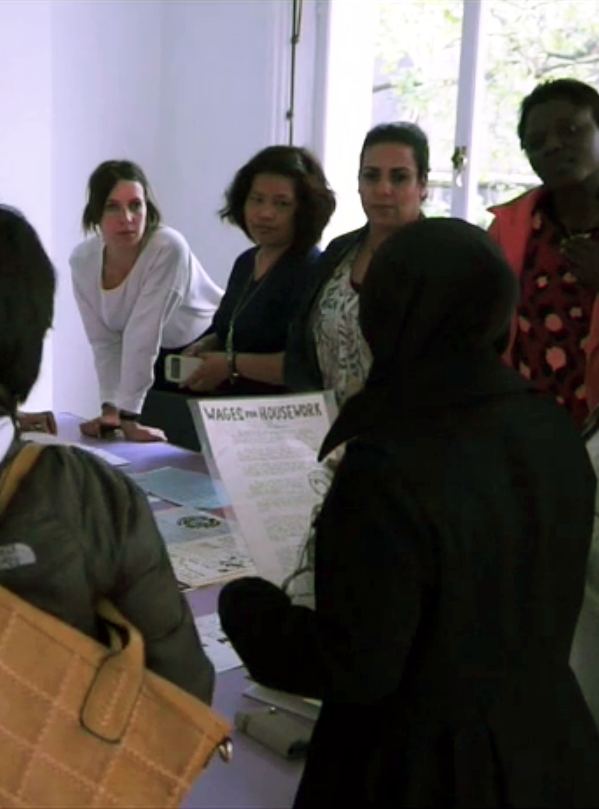 Justice for Domestic Workers (J4DW) visited MayDay Rooms between March and May, 2014, for a series of workshops with Louise Shelley, Werker Magazine (http://werkermagazine.org) and others. J4DW consulted the Wages for Housework collection in preparation for a campaign to overturn the British Government’s policy on the tied Overseas Domestic Worker Visa, which denies overseas domestic workers the right to change employers. J4DW used WfH visual material and manifestos to reflect on the persistence of oppression, and the nature of ‘domestic work’, creating a continuum of struggle between younger women workers – in some cases literally enslaved in domestic labour in Britain – and earlier generations active in New York, Los Angeles and elsewhere. J4DW’s NO TO SLAVERY rally was held in Westminster, London, on 15th June, 2014.
www.kalayaan.org.uk/documents/tied visa 2014.pdf

Since its deposit in 2013, material relating to the Wages for Housework movement has been distributed widely and activated by many groups and individuals. This has ranged from publications (e.g. Das Superpaper, forthcoming, http://dasplatforms.com/magazines), to exhibitions (e.g. The Grand Domestic Revolution GOES ON, City of Women Festival, Ljubljana, http://www.cascoprojects.org/gdr/User/GDR-GOES-ON-Ljubljana), and workshops (e.g. by the Justice for Domestic Workers group, http://www.j4dw.org, at MayDay Rooms).
[frame src=”http://maydayrooms.org/wp-content/uploads/J4DW-activate-Wages-for-Housework-at-MDR-1024×772.jpg” width=”800″ height=”604″ lightbox=”on” title=”IMAGE_TITLE” align=”left” ]