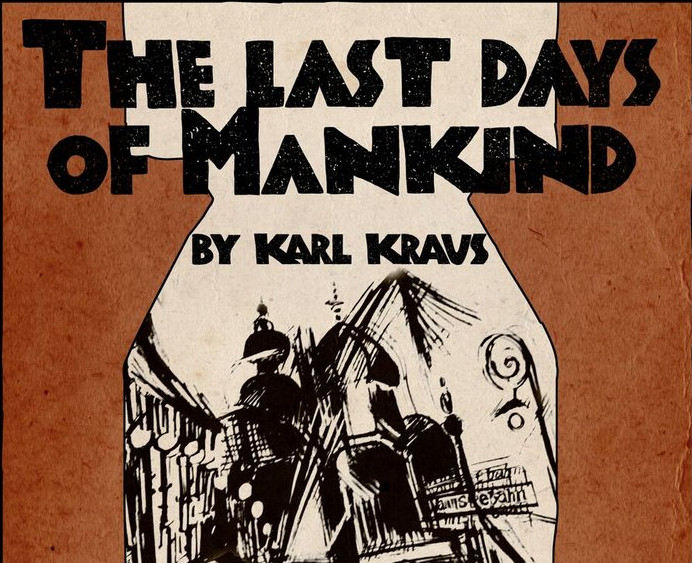 A mass online read-through of Karl Kraus’s World War I epic!
We had previously been running readthroughs of this amazing play. Since we have shut our premises, we are now going to skip straight to Act 5 and the Epilogue over the course of two or three nights. Join us on Zoom and we can collectively perform  to each other this play for hundreds of actors, corpses, soldiers, ravens, crowds, grumblers and optimists! Please RSVP to let us know you want to attend and we will add you to the list and send out a PDF of the script!
“The performance of this drama, which would take some ten evenings in terrestrial time, is intended for a theatre on Mars. Theatregoers on planet earth would find it unendurable. For it is blood of their blood and its content derives from the contents of those unreal unthinkable years, out of sight and out of mind, inaccessible to memory and preserved only in bloodstained dreams, when operetta figures played out the tragedy of mankind. The action is likewise without heroes, fractured and improbable, as it picks its way through a hundred scenes and hells.”
So warns the prologue of Karl Kraus’s cosmic drama, The Last Days of Mankind. Written during the First World War, this expressionist drama charts the rise of nationalism, excoriating especially the jingoism of the press, as provincial nationalism exploded into mass slaughter. It has only recently been translated into English in its entirety. As a play it remains almost unperformable, both due to its length and its demand for hundreds of actors. Over the course of five weeks (or more if we need it) we will read through the whole of the play. A chance to get to know an extraordinary work of theatre in our own time of heightening bellicose nationalism, press cynicism and fake news, and the catastrophes of humanity.