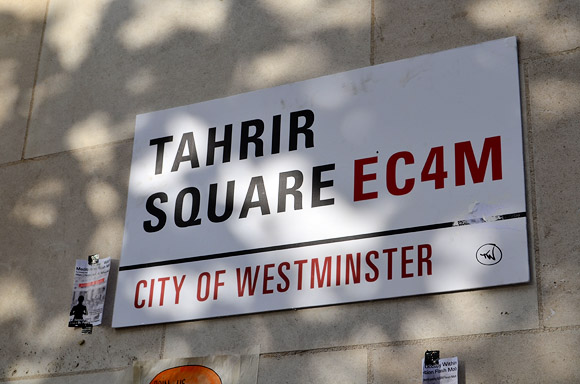 MayDay Rooms would like to invite you to take part in the recovery and activation of a substantial archive of footage from Occupy London (October 2011-February 2012) that has been recently deposited at 88 Fleet Street. Over two sessions, the first on Friday 16th May, we would like to reconnect some of those directly involved in the ‘occupation’ of the site outside St. Paul’s Cathedral to reflect on their experiences and consider its broader implications, particularly in light of more recent struggles. In advance, Chloe R. has edited down over 40 hours of footage into a series of rough-cut sequences (approx.1 hr each), covering some of the key events and organisational debates from general assemblies, and from welfare, media and legal working groups. Please feel free to contribute any additional material you may have.
The day will begin with a brief presentation from veteran filmmaker and activist Gustav (Schlake) Lamche who will talk about consensus-based film editing practices with Cinema Action in the 1970s. Taking this as a cue and in the spirit of Occupy, we would then like to experiment with a collective editing process whereby small working groups take on the film sequences and carry out a ‘paper edit’, reporting back to the full group at the end of the day. This will culminate, we hope, in an Occupy film by Occupy activists to form the basis of a second session (tba) where more recent struggles, particularly those linked to the Occupy LSE/ Kings/UAL/Camberwell etc., can be brought into the mix.
Proposed schedule
10.00 – 11.00 Breakfast/introductions
11.00 – 12:00 Presentation by Gustav Lamche and general discussion
12.00 – 1.00 Formation of working groups and viewing of film material
1.00 – 2.00 Lunch hosted by MayDay Rooms and all who would like to help out
2.00 – 4.30 Collective editing of film sequences
4.30 – 5.00 Winding down