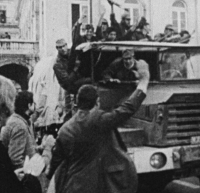 Viva Portugal was made by a group of French and West German journalists (the English version was assembled by cinema action), and traces the first year of the Portuguese revolution.
Besides documenting the political changes, from the overthrow of Caetano’s dictatorship to the failure of a right wing coup in March 1975 (largely because soldiers questioned their officers’ orders), the film deals with the effect of the revolution on the people. Factory and village committees, independent trade unions, are shown being set up; the plight of the farmworkers and the power of the anti-Communist Church are dealt with. It culminates with the occupation of an empty manor house, which is converted into a people’s hospital.

This screening is part of the “Film is a Weapon. Use it! Screening Series” happening every 3rd Wednesday of the month at MDR.
MDR and Platform films has recently embarked on a large digitisation programme of 16mm film from the ’68 onwards, the collection included such gems of footage as Stokey Carmicheal’s speech in Camden, solidarity with hunger strikes in Northern Ireland, raw footage from cinema action, and many more we have not looked at yet!
In anticipation of this hefty haul of revolutionary AVI files we will be putting on monthly screenings of films that antagonise and document.
As part of the Film is a Weapon. Use it! series we will also re-publish some of the material that we hold on the Film and Photography Leagues of the 1930’s- if you would like to get involved with this collection of material please contact rosemary@maydayrooms.org.