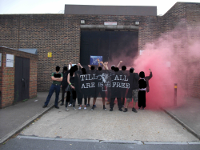 No Money is a regular, roaming night of radical theatre, film, poetry and performance for the impoverished and the terminally dissatisfied. This month’s event will feature films about the police from Koshka Duff, talks about prisons and incarceration from Carl Cattermole and others, readings from Bruno Jasiensky’s insurrectionary black comedy I Burn Paris; also some other stuff. The night is open to everyone and cunningly costs no money to attend, though we’ll be collecting donations for The English Collective of Prostitutes and the All African Women’s Group.