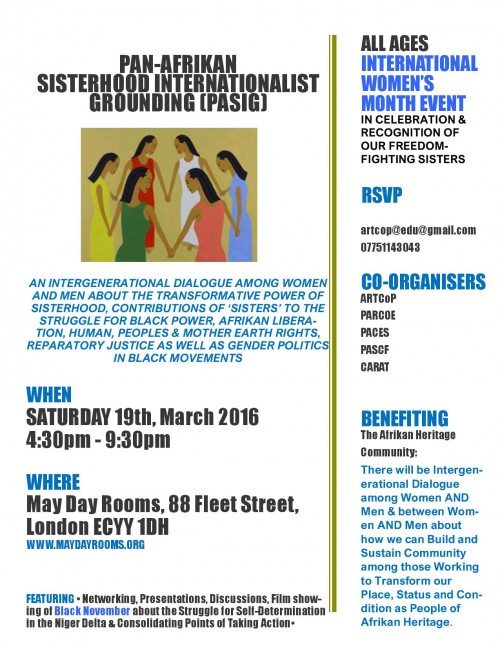 PAN-AFRIKAN SISTERHOOD INTERNATIONALIST SOLIDARITY GROUNDING (PASIG)
An Intergenerational Dialogue among Women and Men about the Contributions of ‘Sisters’ to the Struggle for Black Power, Afrikan Liberation, Human, Peoples & Mother Earth Rights and Reparatory Justice as well as Gender Politics in Black Movements.
What is happening to Sisterhood Among Women campaigners, activists and organisers?
What is happening to Brotherhood among Men?
Why are SOME Men afraid of Female Solidarity?
Are nurturing bonds of support being built by today’s generation of footsoldiers in the Struggle for Afrikan People’s Liberation?
What is getting in the way of OUR Connecting?
This ARTCoP Session in association with PARCOE, PACES, PASCF & CARAT will examine the contributions that Freedom-fighting ‘Sisters’ have made to the Struggle for Black and Pan-Afrikan Liberation in the Past and in the Present
It will also feature dialogue among Women AND Men and between Women AND Men about how we can Build and Sustain Community among those working to Transform our Place, Status and Condition as People of Afrikan Heritage.
There will be a case study on what the Beyonce Phenomenon reveals about Black and Gender Politics.
We will also show and discuss the film: Black November: Struggle for the Niger Delta which is a 2012 Nigerian action drama film starring an ensemble cast and narrates the story of a Niger Delta community’s struggle against their government and a multi-national oil corporation to save their environment which is being destroyed by excessive oil drilling.
RSVP: artcop.edu@gmail.com or 07751143043