Production Something: Legacies of the Lucas Plan (invite) 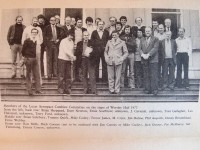 On Saturday December 12 MayDay Rooms will play host to workers involved in the notorious Lucas Plan, which was a proposal made to the bosses/management in the mid 1970s to convert the Lucas Aerospace factories from military to ‘socially useful’ production. Organised by Steve Sprung, former member of Cinema Action and Poster Film Collective.  Steve is currently working on a film with ex-Lucas workers about the plan. The day is earmarked for discussion about the scope of the film and a linked website hosted by the Lucas workers. There will also be a strategy session around plans for the 40th anniversary in 2016.
In line with MDR’s principle of ‘archiving from below’, the meeting will coincide with an international gathering of programmers and web developers who will be working with MDR on ‘militant’ approaches to technics, including librarianship, archiving, and digital distribution). With the dynamic relationship of ‘adapted’ technologies and struggles at the fore, we look forward to a conjunction of past and contemporary struggle and to dialogue between the former Lucas workers, Steve Sprung and others.
The Lucas Plan
In 1976, against a backdrop of impending redundancies (one in five of the labour force), workers at Lucas Aerospace and the Shop Stewards Combine Committee (SSCC) came up with an ‘alternative corporate plan’ to convert machinery for manufacturing weapons into ‘socially useful production’. This included radical and far-sighted approaches to: alternative energy (e.g., heat pumps, solar and fuel cells, windmills, flexible power packs for small scale electricity generation); to transportation (e.g., road-rail transportation vehicles, duel fuel engines and battery-powered cars, remote control devices, innovative braking systems); and to medical equipment (kidney dialysis machines, artificial limb cybernetic controls, life support systems). The plan entailed the abolition of the traditional top-down managerial hierarchy at the Lucas factories.
The Lucas Plan was lauded by the Financial Times as “one of the most radical alternative plans ever drawn up by workers for their company” (Financial Times, 23 January 1976) and was awarded the Alternative Nobel Peace Prize, ‘The Right Livelihood Award’, in 1981. Solidarity characterized the Plan as an example of “combining the immediate and the utopian in an agitational proposal” (Solidarity, vol.8, no.7). Predictably perhaps, the Plan was rejected by management and the cuts went ahead as planned.
-Year of The Beaver. Documentary film. Steve Sprung with Dave Fox and Sylvia Stevens, Poster Film Collective. 1985)
-The Redirection of Production: The Lucas Aerospace Plan. Stuart Wise, Dave Wise, Phil Meyler 1980
-1976: The fight for useful work at Lucas Aerospace. Kevin Doyle, Workers Solidarity, Summer 1988.