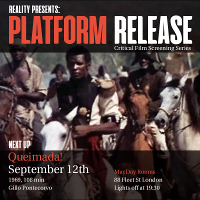 Reality introduces ‘Platform Release‘, a bimonthly film screening series at MayDay Rooms in London. From various parts of the world and epochs we select films with strong critical narrative and acute sociopolitical themes. Upon watching each film we discuss it with the audience, examine the filmmaker’s message, and establish how and whether it is relevant to the present-day social context.
We choose films which are largely unknown to the public, given the modest number of reviews and votes found on various media resources. We argue that the reason for obscurity may lie within the plot of each film. From the British farcical political satire of the 70’s to the grim post-Soviet existential drama the films in our roster examine authoritarianism, class division, corruption, intolerance — topics that might be igniting for the general public. It is possible that the distribution at the time of the release was severely limited due to the film’s subject matter. We are certain that national censorship boards banned at least two films featured in our 2019 selection.
The relatively high production value of these films suggests that they targeted a wide audience, yet somehow did not reach it. Our screening program intends to compensate this inequity, but our effort depends entirely on your attendance. The screenings are free of charge, although donations are always welcome. We expect the series to be educational, sometimes entertaining, but most importantly inspirational to politically active viewers of different creeds.
The Platform Release film screening series begin with Queimada, a 1969 film by Gillo Pontecorvo, director of the critically acclaimed Battle of Algiers. Queimada, also known as Burn!, features Marlon Brando as one of the leads, and Ennio Morricone as the composer. It is the work of an impressive scope, delivering an epic story of the colonial times in the Caribbean with the help of an extensive cast, stunning set and costume design, and plenty of theses to construe. The title, and, ultimately the message of the film, invoke the present-day calamity of forests on fire around the globe.
https://www.facebook.com/events/501379917315449/