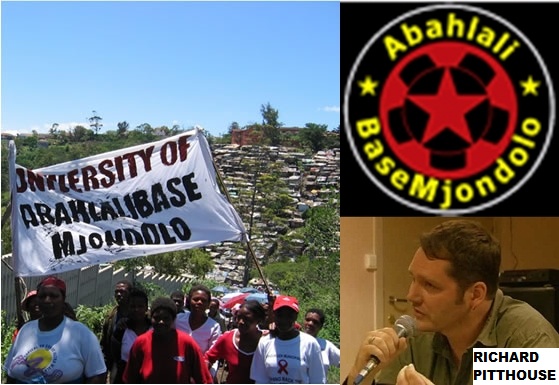 The CAFA Archival Resources Action Team (CARAT) working out of May Day Rooms (MDR) is facilitating a conversation with Dr. Richard Pithouse from 2pm to 5pm on Saturday, 30th August, 2014 at the MDR offices, 88 Fleet Street, London EC4Y 1DH, United Kingdom.
Richard Pithouse is of particular interest to CARAT and MDR due to his association with both George Caffentzis and Silvia Federici, both Scholar-Activists in the United States of America (USA), who played leading roles in the founding and work of the Committee for Academic Freedom in Africa (CAFA), some of the archival documents of which are now housed at MDR and upon which the CARAT is currently working.
This event is part of the CARAT Groundings series of conversations and Q&A sessions with Activists and interesting personalities from all over the world connected to Education, especially at Grassroots levels.
Profile: Dr. Richard Pithouse teaches Politics at Rhodes University in South Africa. He has published widely in the academic and popular press on popular and urban struggles. He has worked closely with a number of urban movements in South Africa since the turn of the century. His Scholar-Activism is more popularly known in association with his participation since 2005 in Abahlali baseMjondolo (AbM), a shack-dwellers movement largely based in the city of Durban, South Africa. His PhD examined the shack settlement as a site of politics, and the shack-dweller as a subject of politics, in Durban from the 1870s to the contemporary moment. It argued that liberalism, Marxism and elite nationalism have all failed to take full measure of popular political agency expressed from the urban land occupations. His recent journalism has tracked escalating state repression of popular urban struggles in Durban. His most recent academic articles have been theoretical interventions aimed at engaging left-wing thought, with a view to expanding its conception of the sites and subjects of political agency, to take better account of the urban land occupation as a site of politics, and its occupiers as subjects of politics.