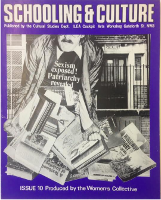 Launching!
SCHOOLING & CULTURE
Volume 2, Issue 1
THE STATE WE’RE IN
Education reforms have disfigured relationships and intentions built on care and learning by preferencing the data and competition inherent in neoliberalism. And yet, here we are, refusing to be intimidated by the precarity which typifies our time.
SCHOOLING & CULTURE is a new, and old, journal that seeks to disrupt a culture of individualism, competition and surveillance by claiming a new collective position within, and outside of, education.
Continuing a project that began in 1978 at the Cockpit Arts Workshop, and influenced by Stuart Hall’s Centre for Cultural Studies, the re-activation of SCHOOLING & CULTURE is a direct response to a crisis faced by teachers, educators and young people in the UK today. Recognising an urgent need for collective action towards alternative methodologies and politics in the classroom and other sites of education, it is here to initiate dialogue, start support networks, and develop critical praxis.
SCHOOLING & CULTURE is produced on a voluntary basis by and for an open group of teachers, educators and other cultural practitioners. You are invited to expand the project and help formulate the next issue at our series of launch events for THE STATE WE’RE IN, the first issue in 3 decades.
schoolingandculture.org