Screening and Discussion: Diaz – Don’t Clean Up This Blood 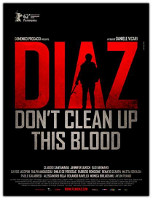 The G8 Summit in Genoa in the summer of 2001 was the culmination of a global wave of anti-capitalist protests, which had begun in the mid-1990s. Activists from around the world converged in the Italian city, and were met by the relentless brutality of a police force significantly composed of fascists. While perhaps the most famous story from those days was the murder of the young activist Carlo Giuliani, this film tells the story of the raid at the “Armando Diaz” school. As they raided the school, where activists were staying, the police attacked Indymedia journalists Mark Covell, breaking his ribs, arm, and spine. He ended up in a coma. The police then proceeded to storm the school beating and violently sexually assaulting everyone inside. The beaten activists were taken to hospital, from where they were then kidnapped by the police and taken to a camp where they were tortured for three days, being held in stress positions, forced to sing fascist songs, and to pledge allegiance to the Italian police.
The police involved (but none of the politicians) were brought to justice in extremely protracted legal proceeding over the last decade, with 25 cops being convicted. The process also necessitated the development of an anti-torture law. The trial relied on footage filmed, collected, and compiled by activists.
In 2012 Daniele Vicari directed the Docudrama Diaz – Don’t Clean Up This Blood. The film will be shown alongside a short video created from indymedia footage. The film will be introduced by Mark ‘Sky’ Covell, who was attacked by the police in Genoa, and will be followed by a Q&A.