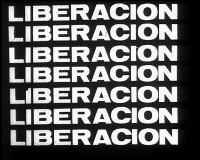 POSTPONED until later date
Film is a Weapon. Use it! Screening Series Presents
The Hour of the Furnaces (La Hora de los Hornos)
Get your free tickets here
As part of our reflection on the way film can antagonise and document struggle, we are very excited to be screening Solanas and Getino’s epic revolutionary cinematic masterpiece “The Hour of the Furnaces” (La Hora de los Hornos). Shot clandestinely between 1966 and 1968, during the initial stages of what would come to be known as Argentina’s infamous “dirty war”, the film was screened secretly as well, to sympathetic audiences of workers, anarchists and revolutionaries who would regularly interrupt the projection to discuss concepts and issues raised in the film.
The 208 minute film dialectically unfolds in a three part narrative: a narrative where Part 1 corresponds to the thesis of the current status quo; Part 2 to a prolonged antithesis of Peronist struggle; and Part 3 to a soon-to-be-achieved synthesis. Both demonstration and an advocation of a new filmic vocabulary, “The Hour of the Furnaces” imports into cinema the affirmative aesthetics of the written political treatise, mixing footage, experimental techniques and a chorus of voices and texts, such as poems (Marti, Césaire), manifestos (Fanon, Guevara, Castro, Juan José Hernández Arregui) and films (Fernando Birri, Joris Ivens, Nemesio Juárez).