The process of the Field in New Cross w. Antiuniversity 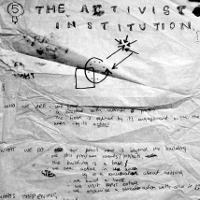 Book Launch and Reading for “”The process of the Field in New Cross”, on the process of founding the Field
as part of antiuniversity http://programme.antiuniversity.org/
and Canary Press, a new imprint collab of the Journal of Aesthetics & Protest and Tools in Common.
Come to celebrate the publication of a book documenting the life of the first three years of The Field.
For the first time we’ll bring north of the river some of spirit(s) that animated this attempt at doing things differently, dis-organising against the grain of hierarchical structures, neoliberal competition and the slavery of work.
With this event we intend to bring the awkwardness that characterised some of The Field’s experiments back to life by engaging in activities like reading aloud, talking, moving, drawing, shifting energies, to get a sense that another brave world in commons and care is possible.
From when The Field began in around 2014 until just around the time we began working on this book in June 2016, The Field was purposefully researching ways to utilise critical theory and creative work for political ends. That is, the field wanted nothing to do with the speculative cultural economy and the art world. Rather, as this book documents with its charts, graphs, founding documents and email exchanges, it utilized critical theory for intensely retrospective and externally creative purposes in effort to found an meaningful neighborhood-based activist space. This book documents that.
The book is published by Canary Press, a new imprint, and collaboration by the Minneapolis-based Tools in Common (http://toolsincommon.org/colophon)
and the Journal of Aesthetics & Protest (http://www.joaap.org).