THE UNIVERSE (Which Others Call The Library)… 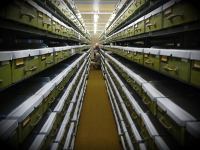 “THE UNIVERSE (Which Others Call The Library)…”

The British Library as a Pre-digital Data Institution.

This event is an artists exposition of the British Library as one of the first institutions to tackle the problem of how to organise public access to potentially limitless amounts of information. It is inspired by the many remarkable things I discovered there during my research as artist-in-residence.

The British Library describes itself as “the World’s Knowledge”, containing everything from the Magna Carta to handwritten lyrics by The Beatles. But some of its most important knowledge concerns how the library itself operates and its role in the history of storing and accessing massive quantities of information. Much of this is embodied in rare items unknown to the outside world, obscure yet key components of a hugely complex infrastructure or oddities that are the side effects of running a centuries old national institution and repository. They include catalogues, reports and letters as well as operational documents such as guidelines, diagrams and electronic systems. This seminar will expose these articles so that they can be discussed and in some cases handled, bringing out the significance of some of the British Library’s least known collection items.