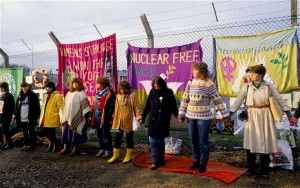 We are planning to spend the session looking through some materials about Greenham Common Women’s Peace Camp (1982-2000) – ​join us for an experiment in collective research; to rummage through the boxes held at MayDay Rooms, to read, talk and collate words, images and symbols.
The first collective text to emerge from the camp framed the purpose of occupation as both a specific protest against nuclear power, but also as a broader project which aimed to develop the capacity of women to resist:
‘The initial purpose of the camp was to protest against Cruise, but its role soon extended to include the preparation of women to bring about such changes. Now the emphasis has moved further towards preparing and politicising women and it would be more accurate to describe Greenham as a ‘women’s resistance camp’.’ (Harford and Hopkins – Greenham Common: Women at the Wire, 1984)
We will not only retrieve information about Greenham, but also try to think about collective practices, resistance and women’s work in the present (and the future!) through a collective encounter with the archive. We’ll bring along some craft materials too so people can make banners/collages/whatever seems like a good idea in response!