Under the Moon: Roller derby as utopia 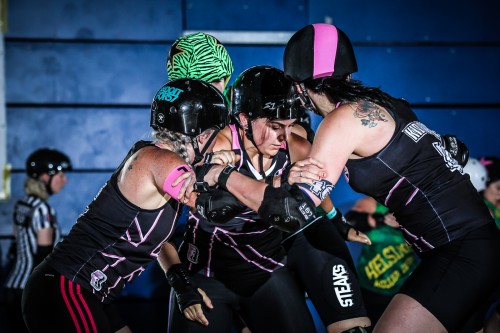 Roller derby is a sport dominated and regulated by women, with a democratic leadership system run by volunteers elected from the body of athletes, a gender policy stating that each athlete’s body and gender history is private, and a strong tradition of celebrating queerness, physical strength, and difference. Anxieties about the influence of money and mainstream media coverage compromising the sport’s values have so far proved unfounded: WFTDA leagues remain non-profits and the sport’s theatrical elements — alter ego names, face paint, clothes that don’t read as sportswear — have persisted as ESPN has began broadcasting tournaments and analysing game-play.
Past and current London Rollergirls members will participate in a discussion about the radical potential of sportswomanship:
-How to run a worldwide organisation in which every member has a say
-Are sports inherently about supremacy over inclusion?
-Sport as a battleground for questions of gender and sexual identity and the queerness of female athleticism
-The social codes involved in being ‘taken seriously’
-Real-life alter egos as a testing ground for new identities
-Trans policies and gender segregation in sports
All are welcome to join us at 7pm at MayDay Rooms.
Some optional reading ahead of the session: http://thenewinquiry.com/blogs/the-beheld/watching-women-want/