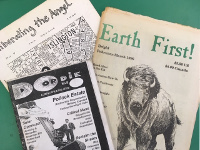 A few months ago the MayDay Rooms Archive received a new deposit of 9 boxes of materials from various eco-anarchist struggles in the 1990s and early 2000s. The collection comprises American and British Earth First magazines and newsletters, as well as runs of other radical environmental and anarchist publications, including Anarchy magazine, Green Anarchist, Black Clad Messenger, Subversion, alongside many other occasional publications and pieces of ephemera. The collection documents actions from around the world that were influenced by the proliferation of eco-anarchist ideas, from the inspiration drawn from the Zapatistas in Chiapas, through to the anti-roads movement in the UK, and European summit-hopping at the turn of the millennium.
On Saturday 30th March we will spend the afternoon collectively unpacking the boxes, reading and discussing the material together. It will be an opportunity for people who know little of this history to get to know it, and for people who were involved to help explain some of what happened. We will be sorting the material ready for cataloguing, collectively charting some of the struggles it discusses, reading together, annotating, arguing and reminiscing, and generally to get digging through the archive to see what we find. Everyone welcome!