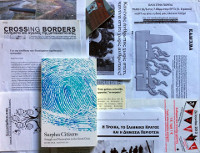 SURPLUS CITIZENS
Struggle and Nationalism in the Greek Crisis
By Dimitra Kotouza
Pluto Press
https://www.plutobooks.com/9780745337784/surplus-citizens/
Book launch with guest speakers:
* Alberto Toscano, Reader in Critical Theory, Goldsmiths, University of London
* Elena Loizidou, Reader in Law & Political Theory, Birkbeck, University of London
The crisis in Greece has elicited the full spectrum of responses – from optimism for a left parliamentary politics inspired by Syriza’s electoral victory, to pessimism about the intransigence of the EU and calls for the reinstatement of full national sovereignty in Europe.
In Surplus Citizens, Dimitra Kotouza questions the terms of the debate by demonstrating how the national framing of social contestation posed obstacles to transformative collective action, but also how this framing has been challenged. Analysing the increasing superfluousness of subordinate classes in Greece as part of a global phenomenon with racialised and gendered dimensions, the book interrogates the strengths, contradictions and limits of collective action and identity in the crisis, from the movement of the squares and neighbourhood assemblies, to new forms of labour activism, environmental struggles, immigrant protests, anti-fascism and pro-refugee activism.
Arguing against the strategic fixation on unified identities and pointing instead to the transformative potential of internal dispute within movements, Surplus Citizens highlights the relevance of a discussion of Greece to collective action beyond it, as we continue to traverse a global financial crisis that has provoked conflicts over nationalism, immigration and the rise of neo-fascism.
ENDORSEMENTS FOR SURPLUS CITIZENS
‘A powerful model for investigating the dynamics and limits of contemporary surplus rebellions’ – Alberto Toscano, author of ‘Fanaticism: On the Uses of an Idea’
‘In this original study, Kotouza powerfully shows how national social struggles are littered with contradictions and exclusions. Nevertheless, Surplus Citizens offers us the hope of a more inclusive, transnational politics’ – Elena Loizidou, Birkbeck University of London
‘An extraordinary guide’ – Joshua Clover, author of ‘Riot. Strike. Riot: The New Era of Uprisings’
An extraordinary achievement. Kotouza’s incisive contribution to critical social theory and to the analysis of the contemporary dynamics of capitalist social relations should be read by all’ – Werner Bonefeld, author of ‘Critical Theory and the Critique of Political Economy: On Subversion and Negative Reason’