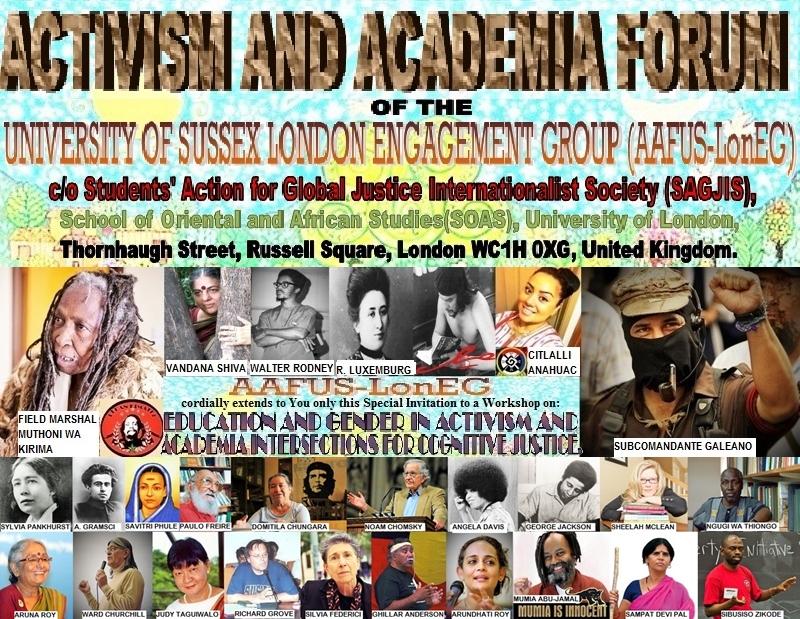 The CAFA Archival Resources Action Team (CARAT) is facilitating a discussion with some of the participants in the First Activism and Academia Forum International Conference (AAFIC-1) at the Countering Education meeting in May Day Rooms (MDR) at Fleet Street, London from 6pm-9pm on Monday 15, September, 2014. AAFIC-1 Participants so far confirmed for this Countering Education meeting include AAFIC-1 specially invited guests such as Obaapanin Adwoa Oforiwaa Adu and Ama Selasie Agbitor (both from Ghana) and Esther Standford-Xosei (United Kingdom); other Conference participants, including some CARAT members, will contribute to the meeting.
Guests:
Obaapanin Adwoa Oforiwaa Adu is a member of staff of the University of Education Winneba (UEW) in the Central Region of Ghana, the premier institution of Higher Education for training Teachers in the country. She is also a Distant Learning PhD student of the University of Sussex at Falmer, Brighton here in United Kingdom. Her Scholar-Activist work beyond promoting Gender Mainstreaming in UEW includes serving as the Co-Deputy Coordinator of the ASASEYAAMMA, Pan-Afrikan Green Campaign for Global Justice and the Co- Deputy Convenor of the Sheroes Heritage Learning International Convention (SHLIC). She is also active as an Honorary Co-Vice President of the All-Afrikan Students’ Union Link in Europe (AASULE).
Ama Selasie Agbitor works professionally as a Curatorial Facilitator for Arts and Crafts Promotions in Accra, Ghana. Her Activist responsibilities include serving as the Co-Deputy General Secretary of the ADZEWAGBETO Pan-Afrikan Women’s Liberation Union (ADZEWAGBETO-PAWLU), which is also based in Accra, Ghana. She is also a Co-Deputy General Secretary of the Environmental Justice Alliance of Ghana for Sustainable World Development (EJAGSWOD). She plays a leading role in facilitating links between various Communities of Resistance (CoR) in Ghana and beyond, particularly their women and those involved in Environmental Justice Resistance against polluting extractive industries and in defence of Mother Earth Rights. She is also a Co-Deputy Coordinator of the UBUNTUMAFUNZOSA popular educational campaign in Ghana as well as a Co-Deputy Convenor of the VAZOBA Afrika and Friends Networking Open Forum (VAZOBA-AFNOF).
Esther Standford-Xosei is a Jurisconsult specialising in the practice of Law as Resistance which she is engaged in as the head of SoulLaw, among others. She is a Co-Vice Chair of the Pan-Afrikan Reparations Coalition in Europe (PARCOE), and a Co-Deputy General Secretary of the Global Justice Forum (GJF). She is the Co-ordinator of the Afrikan Reparations Transnational Community of Practice (ARTCoP), which is being developed alongside her PhD Studies in the University of Chichester linked to the University of Sussex. She is also the Co-Chair of the Interim National Afrikan People’s Parliament (iNAPP) and co-chairs the iNAPP Legal and Constitutional Sub-Committee. She is also a Joint Co-ordinating Director of the Pan-Afrikan Community Educational Services (PACES), which is currently focusing upon promoting the Queen Mother Moore Educational Complex Campaign (QMMECC), in which some members of the CARAT are also involved.