In the Annals – George Caffentzis on CAFA and archiving 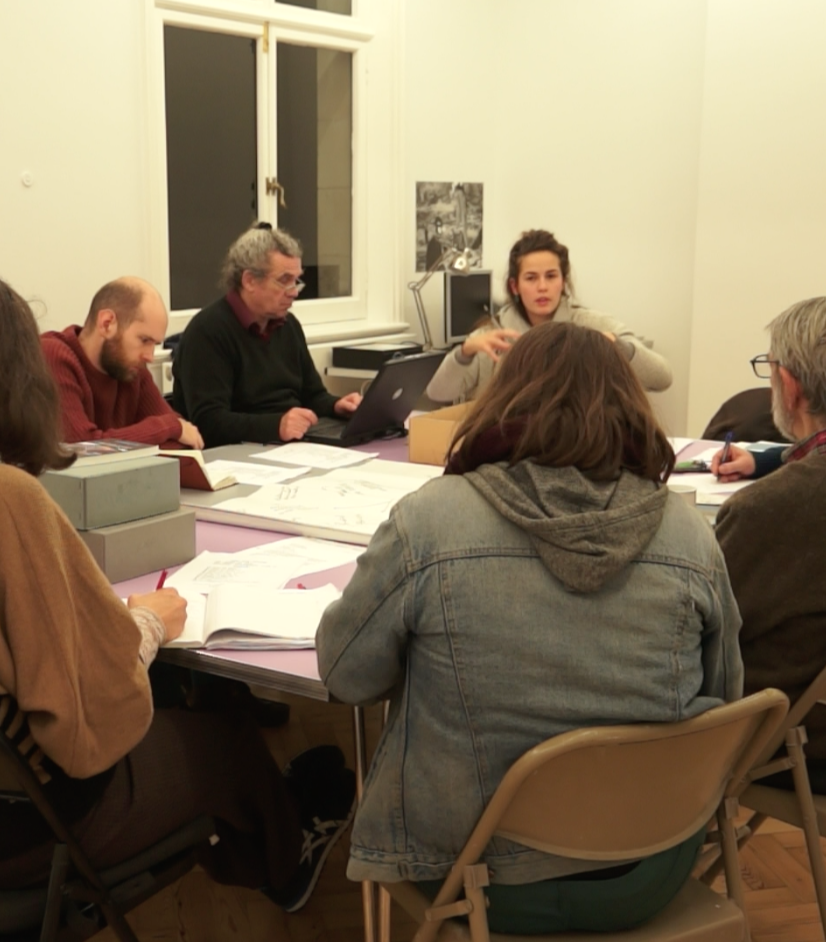 MDR Bulletin 009: In the Annals – George Caffentzis events, November 2013
Almost a year has passed and most of it has been filled with site meetings and construction works on the newly opened MayDay Rooms building at 88 Fleet Street. We are currently in a scoping period during which we are testing out the capacity of the building and putting in place the infrastructure we need. We welcome all to come visit and feed in your ideas on our open days – Thursdays and Fridays between 1:00PM and 5:00PM. Watch this space.
To coincide with George Caffentzis’ visit to London to launch his recently published collection of essays entitled In Letters of Blood and Fire, MayDay Rooms plan to continue a process initiated at the Marx Memorial Library in January 2012 with materials related to the Midnight Notes Collective and the Committee for Academic Freedom in Africa (CAFA). The CAFA archive, assembled by George Caffentzis and Silvia Federici and currently held at MDR, covers the work of the Committee during the 80′s/90′s. This was an organisation dedicated to generating support for the struggles of students and teachers in Africa in the face of the Structural Adjustment Programs (SAPs) which were being imposed across Africa by the IMF and World Bank. In many ways this enclosure and forced commodification of education provided a model which has subsequently been used in the UK and elsewhere.
Over three days in late November, MDR will host discussions, dinners and a guided drift through ‘radical Fleet Street’, with a view to linking historical material to present purposes. We aim to consider procedures concerning ‘donations’ that straddle the personal and political, and ways in which the experience of these earlier struggles can deepen our understanding of, and inform responses to, contemporary developments in education.
• George Caffentzis, In Letters of Fire and Blood: Work, Machines and the Crisis of Capitalism (PM Press, 2013)
https://secure.pmpress.org/index.php?l=product_detail&p=424
• George Caffentzis (with Silvia Federici) on CAFA. Marx Memorial Library, January 2012:
<http://maydayrooms.org/collections/committee-for-academic-freedom-in-africa-cafa/>
“In the Annals”:
SCHEDULE
Wednesday, November 20th:
3.00-5:00PM: Radical History tour of Fleet Street led by Mark. Open meeting.
7.00-10:00PM: MDR Dinner to celebrate the launch of In Letters of Blood and Fire. Open Meeting.
Thursday, November 21st:
10:00AM-1:00PM: Meeting at MayDay Rooms hosted by MDR & others looking at previous and newly received material linked to Midnight Notes, including an open discussion on procedures concerning correspondence and materials that straddle the personal and political. Open Meeting.
Sunday, November 24th:
3:00-6:00PM: CAFA Workshop led by George Caffentzis laying out for consideration a new batch of material as well as previously donated documents. Open Meeting.
7:00-10:00PM: Dinner hosted by MDR/GC. Closed Meeting
———————-
As places/numbers are limited, please contact in-formation@maydayrooms.org to confirm attendance. There is a canteen on site which operates on a donation basis.

GC:
Starts with election of Ronald Reagan, get out of USA. Invited to teach Calabar (slave port) in 1983. In Nigeria, near border with Cameroons. GC there 1983-1987. SF at Port Harcourt from 1984. In 1982 the debt crisis spread from Mexico to Africa/Nigeria. World Bank & IMF impose conditions (Structural Adjustment Programme: SAP) on aid which then caused significant public debate. IMF dropped out. WB conditionality led to privatisation and commodification of education. Nigerian students very vigorous defending themselves versus the police and the army. GC told that if he continued his political activity he would be deported. Wages dropped by 90% arising from crisis (inflation). GC left in 1987. Many other academics the knew had left often going to the U.S. Nigerian youth inspiring in terms of their aspirations and enthusiasm. Gathered together African exiles in US who kept an eye on the places where the had been involved. Neo-liberal universities became quite quickly transformed into businesses. Interested in Africa, although mainstream media did not give adequate to student struggles across Africa, even though student activities in China (Tienamen Square, 1989) were. Kampala Statement outlined a notion of academic freedom different from that popular in USA. KS switched focus from freedom of the professor to freedom of the student to have access to education (without fees).
American Association of Academic Professors.
In 1991 CAFA was set up and goes on to 2006. It started off quite isolated mainly with African academics who were exiles and refugees, who had resisted the SAP.

Much of the work was done to critique what the World Bank was actually about. Campaign against WB from participating in the African Studies Association. WB responded saying you don’t understand us! GC offered job to work with liberal African-American institute. Continued to hound WB as regards impact on African education and universities. Anti-globalisation movement became very large and Nigerian students followed world events, through wall posters on campus. Initially primarily Anglophone, but after Ossain XXX became involved developed in Francophone Africa as well. Continuation of organisation in new circumstances after 2006 did not seem relevant.
Denis Brutus was a South African athlete and poet in ANC shot by South African Police and arrested. Left RSA and went to USA. Reagan administration tried to get him deported in 1980. Campaign in USA to stop deportation. He organised Olympic boycott of South Africa. After end of apartheid Dennis campaigned against ANC capitulation to IMF/WB. He had a big impact on the development of the anti-globalisation/World Justice movement. Denis was linked to CAFA.

Kampala Declaration on Intellectual Freedom and Social Responsibility
Read articles 1-8
Came out of a conference at University of Dar es salam, Ernest . . . of Congo

Archives:
How do we bring the archive to life. Not merely for researchers to take information out, but also to put information in. How can MDR and like minded archives work to make a more interactive archive
Is Kampala Statement on-line? Wikipedia?
Wikipedia available on-line for mobiles in Africa?
Updating archive with more contemporary material. African students where are they now? Are some of them in the UK?
SOAS Panafrican Students Union
SOAS has received funding for PhD research – could be useful.
Asylum seekers communities here, problems with access to education, could develop those links.
Show continuity.
Drop off of political activity in African American community in the 1970s. Key agitators moved “back to Africa”. Some Black Panthers went to African countries with left wing regimes. Drop off linked to increased imprisonment. In 1960s there was a very conscious relationship, but it broke down by the 1980s/1990s.
Platform – an oil based pressure group active in London with links in Nigeria, e.g. around Shell’s activity there, and more recently BP.
Sylvia Federici based at Port Harcourt, where there were lots of studies of the impact of the oil industry.
History of SAP is yet to be written: starts of as very rigid, but develops in different ways in response to struggles. Official decisions are not always put into effect.
This story needs to be written, wherever these sorts of things are.
Abahali base m’jelo interesting organisation in SOuth Africa.
Action Points: