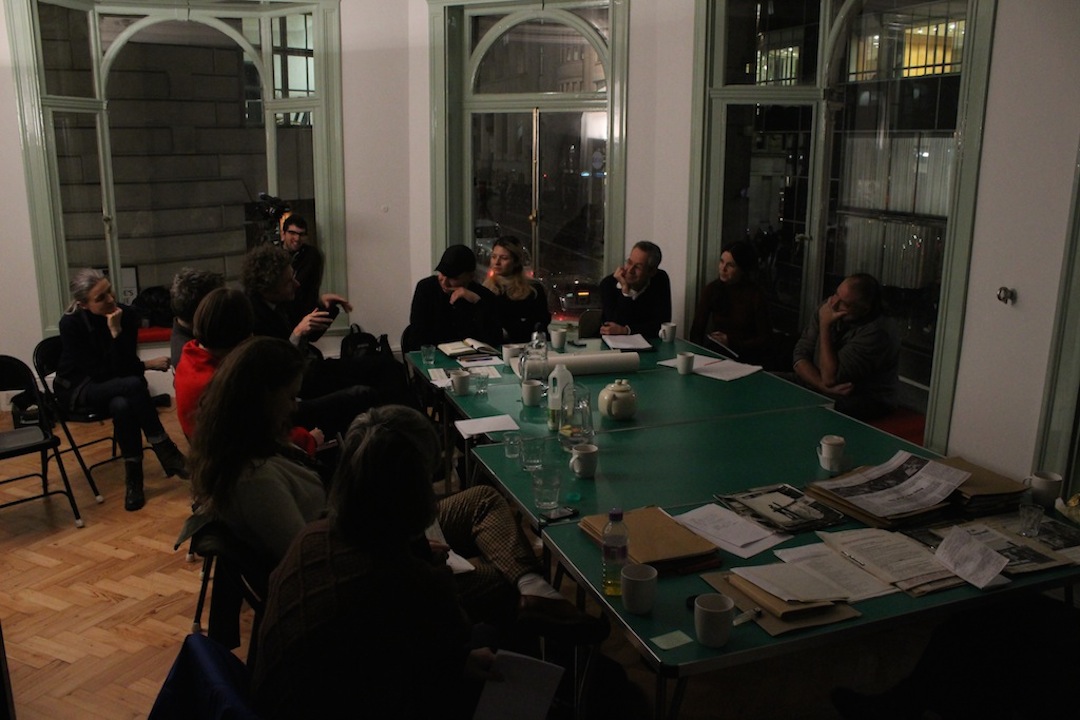 MDR Bulletin 010
Play-Work-Non-Work-Play-Non-
Workshop and screening with Wilf Thust at MayDay Rooms. Monday December 16, 2013 12-7pm
As part of MayDay Rooms’ commitment to recover and put history to work (and play), from December 2013 it will begin an exchange with Wilf Thust, artist, filmmaker, educationalist and founder member of Four Corners in London. Over the next two years, as part of the Experimental Education strand, Anthony Davies and Nils Norman will coordinate with Wilf and others the screening and reexamination of a host of seen/unseen film material produced between 1972-1986, for the most part linked to ‘children’s workshops’ in the work/places and play/grounds of London.
“Fuck off, means a thousand times a thousand things, fuck off” (Barbara, Where is the Gaiety?, 1973)
The first of these, Where is the Gaiety?, was shot over three weeks in the Summer of 1973 on location at the Notting Hill Adventure Playground, with support from the Dashiki Black Community, anti-authoritarian educationalist, Annegret Nettelroth, and Frank McField, a local community organiser. A sequence of still images with narration by the subjects themselves, it might be said to act as a more experimental companion piece to another Concord Films production which addresses the same subject at around the same time, namely Andy Walker’s This is our Playground (1972, 22 mins, b&w). In both, inner city decline, abject material conditions and struggles confronting local communities loom large, though in Where is the Gaiety? the film’s voice comes, not from an observer or social commentary, rather from its young subjects, including Sylvester, a 13 year old youth suspended from school. In contrast to the optimism that marks This is our Playground, here the filmmakers are initially held in suspicion and images of play sit alongside jarring narratives of their ‘subjects’ remarking, for example, “the black community says, our black children are being socially killed daily by British democracy, tolerance and fair play!”
Where IS the Gaiety?
During the same period Wilf, along with three other young filmmakers, Joanna Davis, Mary Pat Leece and Ronald Peck, went on to set up Four Corners with a desire to “bring films and filmmaking to those who had previously been excluded from the whole practice”.* Forty years later, a few miles up the road, Wilf will reopen the account and offer up original films, out-takes, photographs, slides and various booklets/commentaries for further discussion and as a continuation of the process set in motion in 1973.
WHERE IS THE GAIETY? Wilf Thust, Concord Films (1973, 10 mins, b&w)
“Related thoughts: playgrounds, play choices, costs, risks, safety, free play, play facilities, adult supervision, wild play, gender, class, fun, cleaning up, skills, self made, clubs, parks, Notting Hill Gate, Highriser, Brixton, my creation of an animation course in Brixton College, scratch films + Concord Films distributions……” (Wilf Thust, October, 2013)
Schedule Monday 16, December 2013
12.00-2.00pm Lunch
2.30-3.00pm Film Screening 1. LORELEI and WHERE IS THE GAIETY?
3.00-3.15pm Break
3.15-5.00pm Workshop discussion
5.00-6.00pm Break
6.00-6.30pm Film Screening 2. LORELEI and WHERE IS THE GAIETY?
6.30pm Drinks
Film screenings for 2013-2015
RAILMAN (1975). The working of a station master on a platform in South London
ON ALLOTMENTS (1975). Working people’s recreation on an endangered piece of land
SOS (1979). Documentation of a strike in defense of an alternative teaching project in Germany, created by Hartmut von Hentig
DON’T THINK SO and OLD ENOUGH (1980-82). Results of the ‘Cinema Workshop’ with Young People at Four Corners in the East End of London
IS THAT IT? (1985). Young people in the mitts of facts concerning their lives in the Borough of Tower Hamlets, East London
NO SAFE WAYS (1986). Creative work produced as artist in residence with primary school children in Hackney, East London
*Four Corners: http://www.fourcornersfilm.co.uk/history
MayDay Rooms, 88 Fleet Street, London EC4Y 1DH. Tel: 020 3691 5230. Mob: 07988 521 511. Email: in-formation@maydayrooms.org