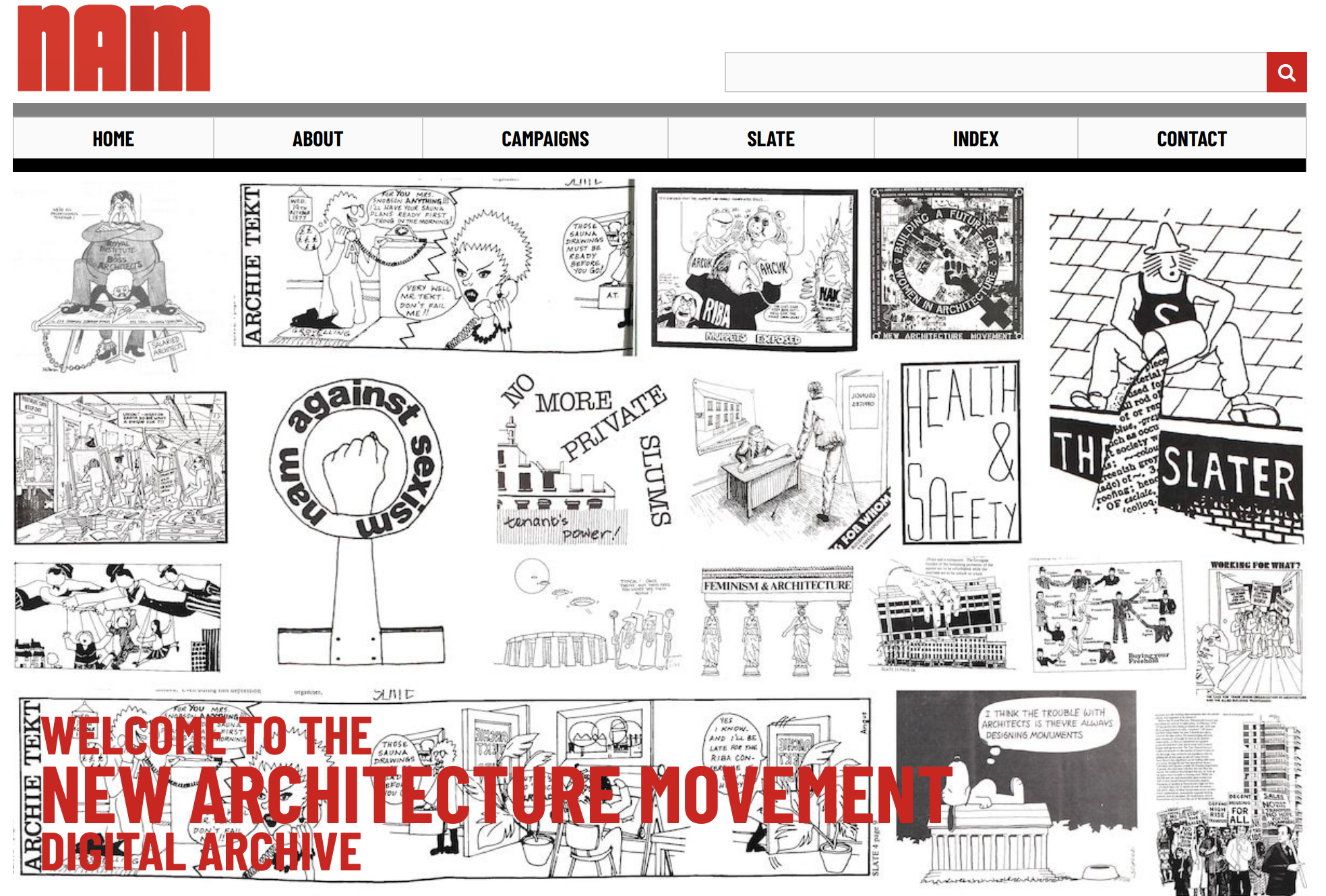 RSVP by email to namdigitalarchive@gmail.com

A unique collection of documents from a significant activist movement that challenged the established order of architectural practice both in the private and public sectors goes online in November. In the mid-1970s the New Architecture Movement (NAM) gave a voice to progressive and inclusive initiatives that encouraged people to promote social change and greater equality through their work in the built environment.

The launch of NAM’s archive provides both a new resource for historical research and also a challenge to present and future generations in the field to reinterpret and apply NAM’s radical ideas to current issues. NAM brought together young idealistic architects, engineers and planners from across the UK seeking ways to reform working practices and the planning and development process. In an intensely productive period from 1975-80 the movement ran workshops, campaigns and seminars on a range of issues – professional education and governance, workplace structures, feminism, public sector design, worker unionisation – to create an alternative vision that put the priorities of people and communities ahead of developers,corporations and officials.

The archive brings together previously unavailable historical documents and publications held by former members that give a comprehensive picture of NAM’s aims, actions and achievements. It also provides an insight into the workings of activist groups in the 1970s, a period when many young people came together to advance the idealism of the 1960s and find practical and effective ways to promote social change. Key items include the NAM Handbook, which captures the essence of the movement’s objectives, structure and
activities, and a complete set of the movement’s lively magazine SLATE. With its provocative alternative graphics, SLATE encapsulates the collective energy of 1970s grassroots activism.

In 1980 the New Architecture Movement members moved on to develop their ideas, both in groups such as Matrix Feminist Design Co-operative and the Public Design Service, and also in the professional practice of individual former members. Between 1979 – 1985, Haringey Council Architects Department implemented a number of pioneering features from the NAM Public Design Service proposals, many of which went on to become adopted more widely. More recently there has been a renewed interest in the causes and issues that NAM championed in discourse, exhibitions and articles, and it is hoped the archive’s launch will further stimulate debate and fresh ideas to meet the critical challenges in the built environment today.

NAM’s digital archive is available at http://newarchitecturemovement.org
The website is hosted by MayDay Rooms, which also houses the physical archive, and is freely accessible at the MayDay Rooms’ office at 88 Fleet St, London EC4Y 1DH